Review: What You See in the Dark, by Manuel Muñoz 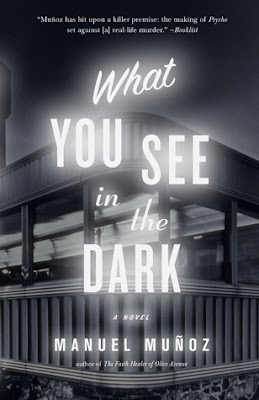 And then her own eyes, in a close, tight focus and a slow, painful pullback, trying not to blink. But it had been worth it, her face frozen in the stupor of cruel death, the close-up of her eye. A spiral, a circling. The slow dance in the tub repeating. Such brutality meant erasure, a cold, unblinking eye, a woman lying in a pool of her blood, which was draining away, vanishing. The bathroom in near silence, save the flow of the water, as the camera glided over to a newspaper concealing the stolen money.

The Actress watched the rest of the film in disbelief, terrified at the shock, but strangely satisfied at her last, unblinking appearance, her face registering—for the first time she could remember in a film—that a death meant something. An absence. There was something unsettlingly gorgeous about the slow spiral of her eye, the movement gradually coming to a finish, the way a dance ends.

Manuel Muñoz’s first novel following his collection of short stories The Faith Healer of Olive Avenue is an abstraction of a murder set against the filming of an American classic. Bakersfield, California, 1959: a legendary, once-innovative Director and his leading Actress descend on the small town to film a small production that will forever ingrain itself in the cultural milieu. Their presence, however, does not disrupt the small town the way the very real murder of a young woman at the hands of the town’s most eligible bachelor does.

A tapestry of love gone wrong in a small community and juxtaposed with the carefully fictionalized filming of Psycho, Muñoz’s What You See in the Dark is a compelling exercise in muted horror somewhat akin to deliberately constructed psychological duress. In-depth characterization is sacrificed to the density in which Muñoz paints his setting with lyrical, almost ethereal descriptions that do more for the development of the narrative’s mood than they do for the understanding of why Dan Watson murdered delicate young Teresa. The reasons for his actions, implied or otherwise construed, are the MacGuffin the story requires to touch upon the Actress (Janet Leigh), the Director (Alfred Hitchcock), the film they seek to create, and its affect on the atmosphere and psychology of the small town of Bakersfield and its citizens.

As previously mentioned, Muñoz has an artist’s touch. While the plot may want for closure, the soft, sad trumpet of malaise that the author blankets each chapter with grows more expressive and unsettling with each shift in perspective, as the atmospheric image of the town slowly comes to life. Bakersfield is a wounded animal, quietly moaning to itself as it does what it can to hide its blood from predators. The production of the film, though not integral to the town’s continued existence, is the spotlight through which its darker secrets are revealed.

What You See in the Dark isn’t for everyone. It’s a pensive, introspective book that warrants an inquisitive pace. For those willing to luxuriate over the finer parallels between the lives of the towns folk and the interjection of the film and its cast and crew, it is certainly a worthwhile read.

Posted by Backlisted at 8:55 PM

Backlisted
I am a writer, editor, publisher, artist, musician, film geek, book nerd, and all points in between. I am also the marketing and production coordinator for Edmonton's NeWest Press. Any and all opinions on this blog are mine and mine alone, and do not in any way reflect the thoughts and opinions of my employer. For realzies. If you have a book you'd like considered for review (ARCs, galleys, or finished products), please email me at edensheel@gmail.com. At this point, I do not review from PDFs or ePubs. Sorry for the inconvenience.